Belle says, “Legal counsel has advised me that it’s not a breach of a nondisclosure agreement to reveal matters of public record.

Belle and the Reparations Labor Union are located in Detroit, Michigan. Known as America’s blackest city due to at least 80% of its population being black, Detroit's voters approved the study of local reparations during last month’s municipal election. Belle and the Exodus to Mars production endorsed the EACL for private reparations, particularly for blacks living outside of Detroit. Belle is replacing the EACL with Melanin Biotech Productions LLC as a source of private reparations.

“Private or voluntary reparations do not require government approval or control. Meanwhile, economists black and white accuse blacks of being strictly consumers and not producers, but they are blind to a secret hiding in plain sight. Two clues to this secret are Dr. Charles Drew, the black physician who discovered plasma, and Henrietta Lacks, one of the black women from whom the medical community appropriates ‘forever’ cells. Blacks produce eumelanin. The black in our skin and cells is worth at least $400 a gram. This makes melanin more precious than gold, platinum, oil, and digital currency, thus able to destabilize a racist stock market that refuses to recognize melanin as a valuable commodity. Melanated stem cells have biotech applications in healthcare, cosmetics, energy, transportation, and aerospace; yet blacks aren’t getting paid because our human melanocytes and other cells are considered ‘medical waste’.

“Melanin Biotech Productions is a new company that will take over the Reparations Labor Union’s production of “Exodus to Mars”, an Afrofuturistic comedy about reparations starring Anita Belle and Braxton Vanzant Davis. In the upcoming pilot, the Queen of the Sky and the King of Mars endorse Melanin Biotech Productions as a means for their black children to obtain private reparations for every cell in or derived from their bodies.”

Belle concludes with this message for the descendants and lawyers in the recently-filed Henrietta Lacks’ case: “Please consider making your mother the first named plaintiff in a reparations class action suit. Other blacks, including myself, may not be getting compensated for cells appropriated during childbirth, gynecological surgeries, and other medical procedures. It would be synergistic to join our claims and discover if more blacks have been similarly wronged since their mother's death 70 years ago.” 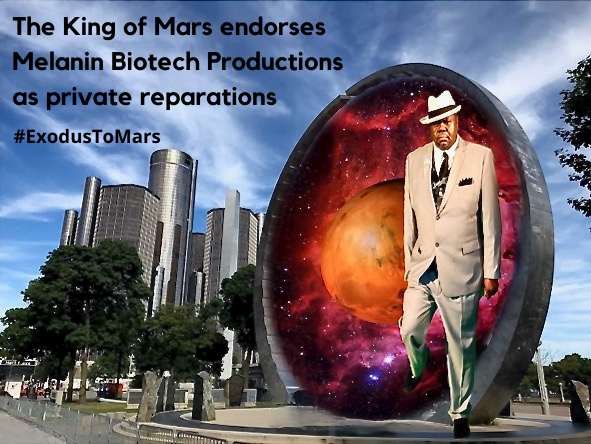